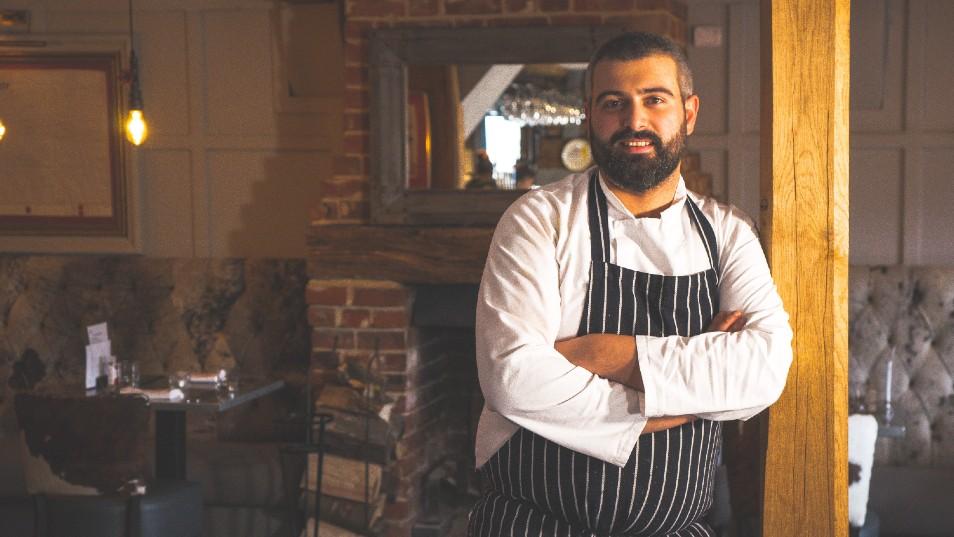 Robert’s culinary career first began at a young age, being around his grandmother who was always in the kitchen cooking Italian & Arabic food. Her love of cooking inspired him to become a chef as he saw the happiness it created within the family environment.

His first job was washing dishes at 2-rosette restaurant 2 days a week. He then began studying hospitality for 3 years whilst working at a local pub to gain crucial knife skills. Once he’d left college, he managed to secure a chef position at Reads restaurant, where he spent 15 months being classically trained to the highest standard.

After moving around a few years, Mantegna started working at The Sportsman in Seasalter, Kent, this would play a pinnacle part in his culinary career. Working alongside the head chef, Dan, Mantegna learned new skills from nose to tail butchery, to creating sea salt from water collected less than 100m away.

In the coming years he tried a few more roles until an opportunity arose at The Dog at Wingham. This started a new chapter in his life being able to showcase his cooking and create his own dishes for the menu, a chance he had always dreamed of. In the years following, the pub won various awards, from GBPA to Estrella Damm Top 50 Gastropubs.

Mantegna says ‘I still vividly remember the day I was called to say we had been shortlisted into the Top 50 awards, I started shaking with excitement, it was something the whole team had worked tremendously hard for and had paid off massively.

Now to be at the helm as head chef of The Dog at Wingham is surreal, the team i have behind me not only in the kitchen but front of house is what makes the dog BARK. They are all amazing, talented individuals who have a real passion for the jobs. I cannot wait to see what the future holds for The Dog!’

Did you always want to get into cooking?

Ever since I can remember I’ve been around food, I come from a family where food is very important and brings everyone together.

What do you enjoy most about your industry?

My favourite part is being able to create food that provides a great dining experience to the customers.

What was the first dish you ever made?

Spinach and ricotta raviolo when I was in my last year of BTEC hospitality in year 11.

Where's your favourite country for food?

Italy as my family roots stem from there!

Daniel Clifford, I have always been a massive fan of his cooking.

What is it that attracted you to gastropubs?

I love the informality of a gastropub, you can receive a high end meal and still enjoy a pint of beer without being judged.

What does being a top 50 gastropub mean to you?

It’s an achievement I have always aimed towards and being recognised for my cooking in the Top 50 Gastropub awards is a dream come true and I hope to move up the ranks in the coming years!

British rose veal - as this is a by-product of the UK dairy industry. I’m proud to be involved in something sustainable and the produce we are supplied is amazing and flavoursome.

What do you think the future holds for gastropubs?

Bright! A Lot of the people I speak to nowadays prefer going to a gastropub for an informal meal and over the years I have seen a spike in the number of gastropubs popping up around the country. Just in Kent alone we are blessed to be home to a number of Top 50 Gastropubs.